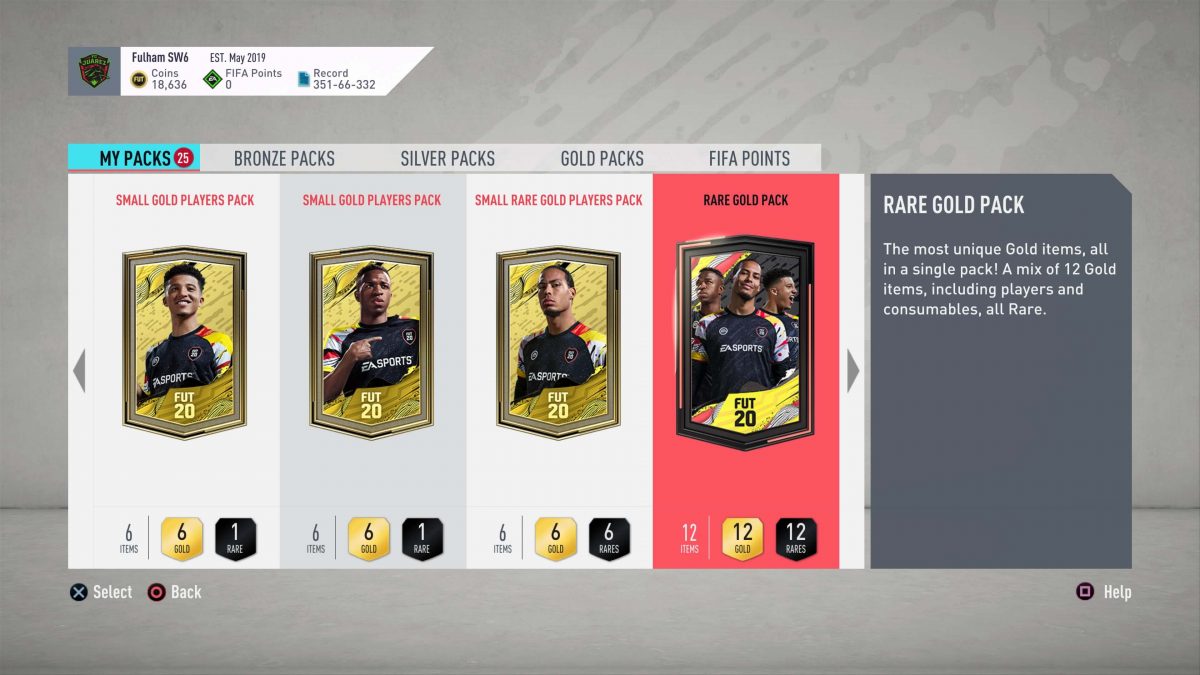 The most unique Gold items, all in a single pack! A mix of 12 gold items, including players and consumables, all Rare.

A rare mixed players pack is a promotional pack in FIFA 20 (FUT20 Game Mode) that can be bought as part of promotional offers, earned as a reward for FUT Champions Weekend/Division Rivals/Squad Battles, or redeemed by completing an SBC.  Rare gold packs include nothing but rare gold cards.  These cards are assorted.  You will receive 12 rare gold cards that are of the consumable, club, or player variety. These FUT packs are available to purchase only during certain periods on the Fifa markets.  Usually they are released during a big TOTW or TOTY release.  Normally you are limited in the quantity you are allowed to buy and also in the time period in which you can buy them.

Rare Gold packs can come in untradable and tradable forms.  Untradable versions are not sellable and you will have to keep the cards.  Discarding untradable packs would net you 0 coins so there is no value there.  With untradable packs you can use the players in other SBC’s.  This can turn market worthless items into cards that can be sold.

If you get a tradable version of a Rare Gold Pack you may not always break even on the 25k coins you spent to acquire the pack.  Sometimes Rare Gold Packs pack mega value.  Other times they miss heavily and can cost you.

Rare Gold Packs give you one of the best possible chances on a big score due to their heavy volume of rare golds.  As is with any pack on FUT, it’s all a gamble.  Sometimes you win big.  Sometimes you lose and get minimum pack value.  In this case if you lose it can be a significant loss of around 20,000 coins.