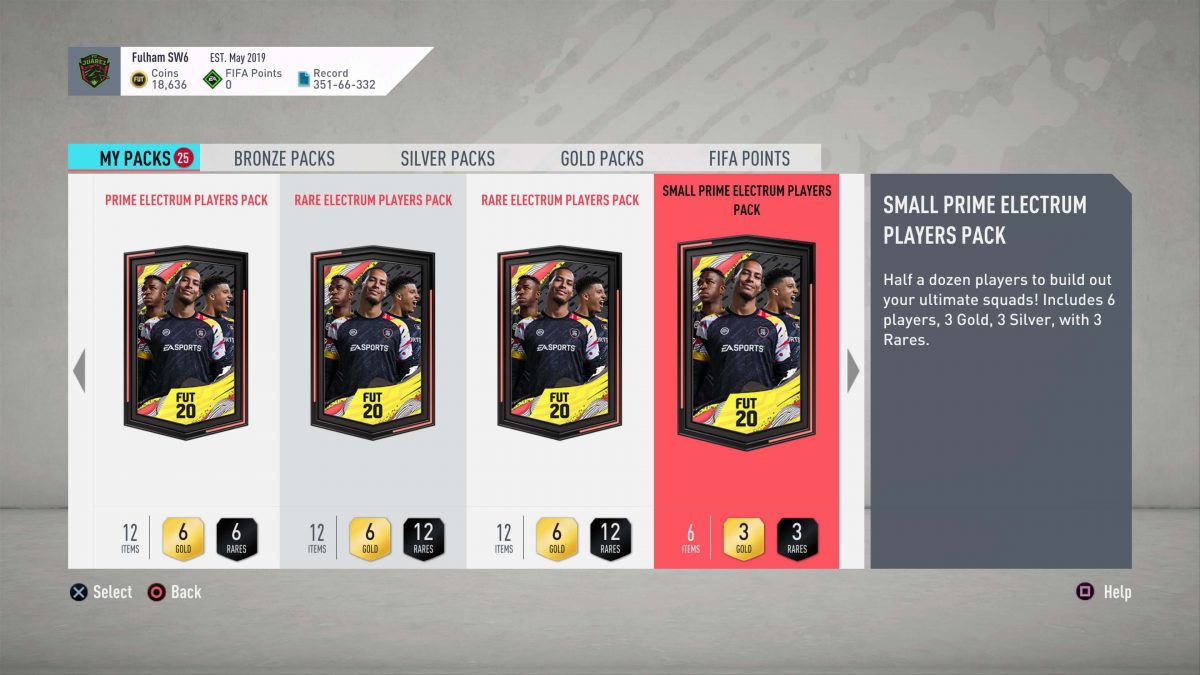 Half a dozen players to build out your ultimate squads!  Includes 6 players, 3 Gold, 3 Silver, with 3 Rares.

A Small Prime Electrum Players Pack is a promotional pack in FIFA 20 (FUT20 Game Mode).  RSmall Prime Electrum Players Packs include a mixture of rare and common cards.  These cards are assorted.  You will receive 6 cards in total, 3 silvers, and 3 golds.  3 of these cards will be rare in quality while the other 3 will be common in quality.  These FUT packs are not available to purchase on the open market and are special/redemption oriented only.  You will either get one of these for completing an assigned SBC (squad building challenge) or for your performance in one of FIFA Ultimate Team’s competitive modes. (FUT Rivals, FUT Squad Battles, FUT Champions Weekend League).

Small Prime Electrum Players packs can come in untradable and tradable forms.  Untradable versions are not sellable and you will have to keep the cards.  Discarding untradable packs would net you 0 coins so there is no value there.  With untradable packs you can use the players in other SBC’s.  This can turn market worthless items into cards that can be sold.

If you get a tradable version of a Small Prime Electrum Players pack you may be surprised that the silvers you receive may be more expensive on the market than the golds.  This isn’t always the case.  If you get a silver from a rare squad build (ie Paderborn and Union Berlin in the Bundesliga SBC) you will find that some of these cards sell on the open market for 15,000-20,000 coins.   It doesn’t matter if the card is a rare silver or a common silver often times when it comes from a rare squad build.  Each has value.  Sometimes commons are even more valuable on the open market than rares.

A Small Prime Electrum Players Pack can be a big score.  As is with any pack on FUT, it’s all a gamble.  Sometimes you win big.  Sometimes you lose and get minimum pack value.