The following is the Team of the Week Moments 3 Squad, also known as FIFA TOTW Moments 3.  This team is available in packs from April 1st, 2020 at 6:00pm GMT to April 8th, 2020 at 5:59pm GMT.  Make sure to grab these in gold packs while you still can!  If not, these can be found on the FUT transfer market for varying prices. 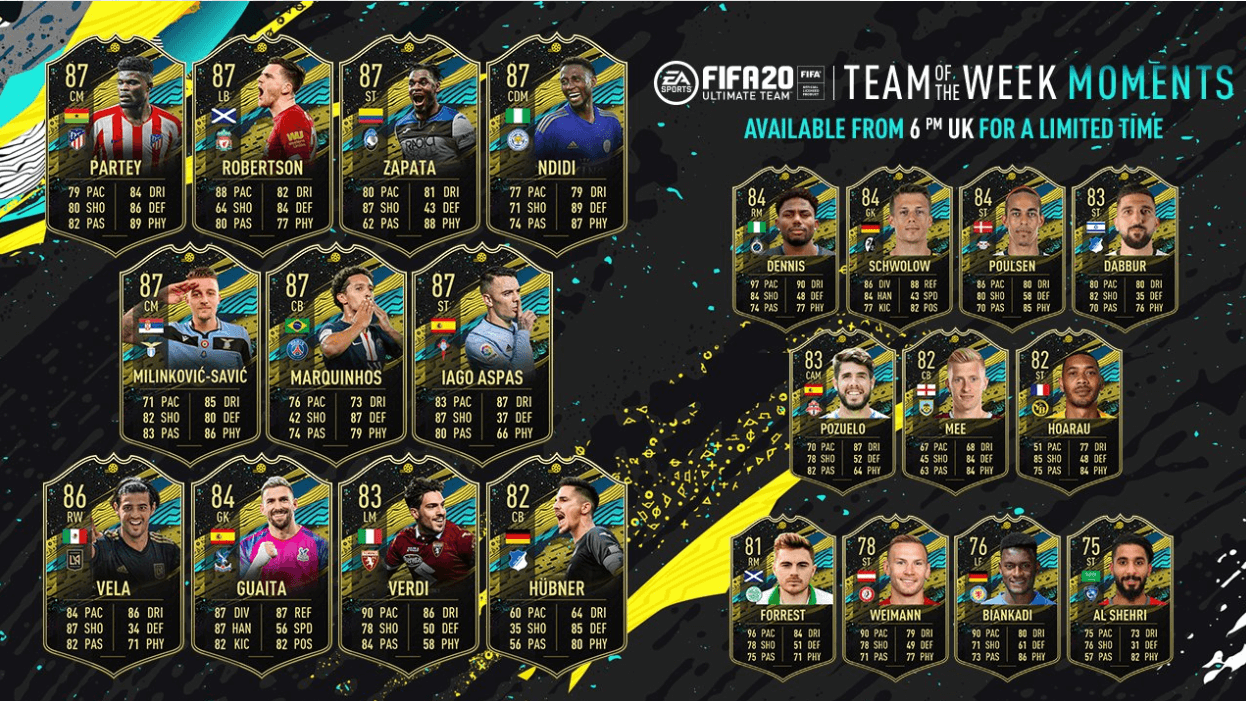 Thoughts on TOTW Moments 3 From the Editor

There were a lot of complaints about TOTW Moments 3 offering little in terms of value this week.  I find that only to be relevant for huge million coin team owners who live their entire lives to play FIFA and only play FIFA.  This TOTW offers a tremendous amount of value to owners of teams who aren't the most rich.

Germany gets a ton of affordability and quality with this TOTW update.  They get another very usable goalkeeper in Alexander Schwolow.  He now has 88 reflexes which combine extremely well with a tall 6'3'' stature.  At 11,000 to 12,000 coins on the PS4 market this is one of the better investment deals of the week.

Yussuf Poulsen is a Danish favorite of many in the FIFA community.  He didn't get an in form this season for RB Leipzig but that doesn't matter now.  This upgrade gives fans of his the upgrade they had hoped for.  At 6'4'' the 3 point pace upgrade to 86 makes this a card to fear when it's in the hands of someone who can actually play.  It's not overwhelming pace, but 80 shooting and 70 passing make this a nice poor mans target center forward.  He'll do well in a 4-3-3 formation.  You may want to try him as a false 9.

Emmanuel Dennis got an upgrade from 75 to 84.  Little seen in this is his 99 jumping upgrade.  I received him as one of my champions weekend league rewards this week.    His blistering 97 pace and 90 dribbling make him an incredible sub.  He doesn't work in many chemistry set ups due to his play in the Belgium Pro League, but if you have Nigerian links or a need for a super sub, he's right up there with one of my favorite OP players of the year.

Vicente Guaita is another player I have tried personally on this TOTW.  I've been very impressed with this card and he's a top 3 goalkeeper in the game for me.  He defends his net well.  With decent height at 6'3'' and very serviceable stats (87 handling, 87 diving, 87 reflexes, 82 positioning, 82 kicking, 56 speed) this thing is extremely underrated.  It's going for discard, but who knows how long that secret will last.

Enjoy the team of the week!  See you in a few days with the next one.