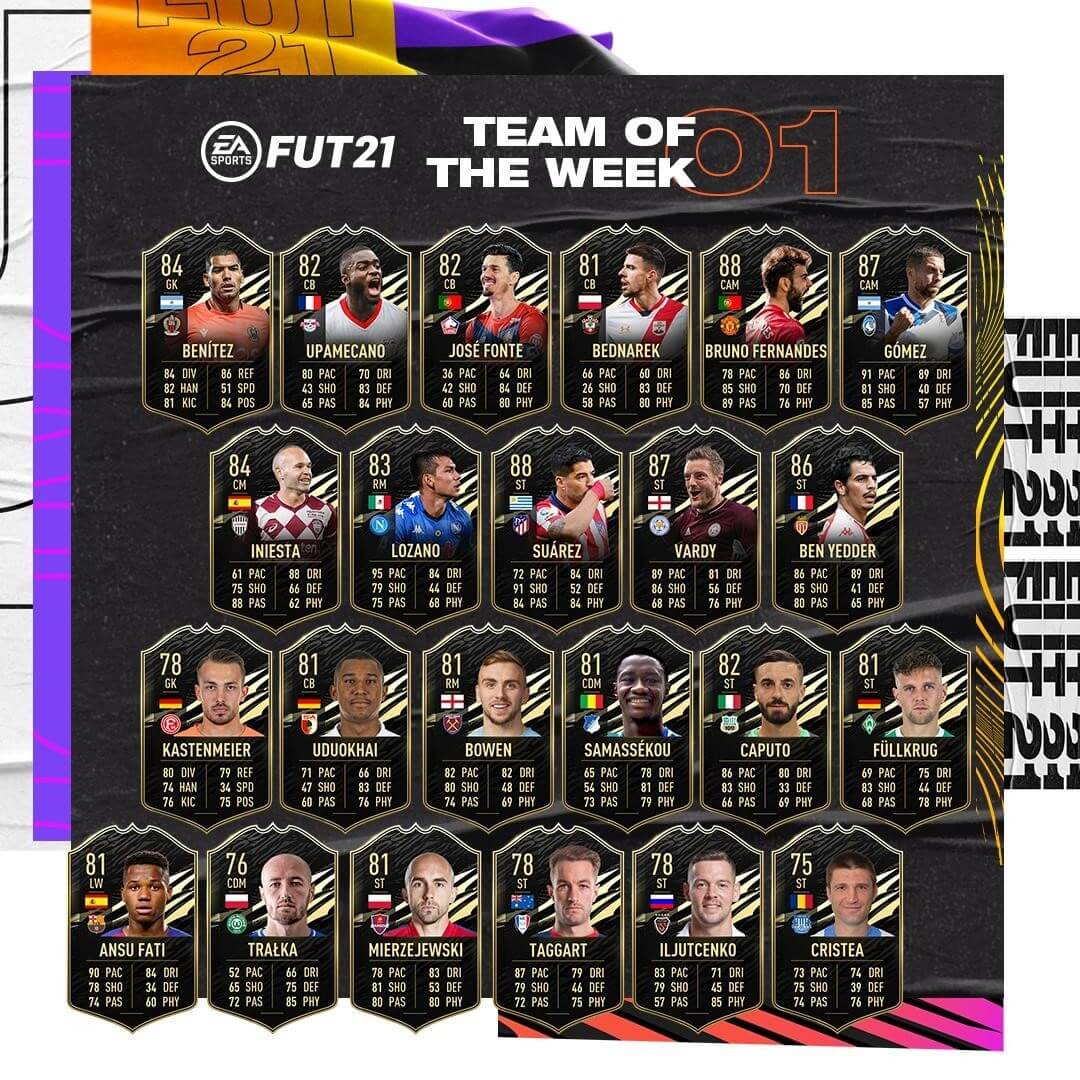 Team of the Week cards are available for a limited time and released each week based on real life performances.  Though the selections are sometimes biased and questionable, here’s who EA decided to put on this week’s team.

Here’s who made this weeks starting XI.  This TOTW is available in packs from 6 pm UK time on September 30th to 5:59 PM on October 7th.

Nice’s Argentinan keeper was crucial in helping Nice take away a point against Bordeaux as the teams drew 0-0.  He made 5 saves, 2 high claims and kept a clean sheet.

Upamecano was a fan favorite in FIFA 20 and he’s back again this year making TOTW 1. The young French center back made 4 clearances, blocked 1 shot and made 7 accurate long balls (out of 10) as Leipzig drew 1-1 with Leverkusen.

Polish center back Jan Bednarek was a cornerstone in the Southampton defense as they eeked out a 1-0 win over Burnley.  It was Southampton’s first points earned in the new premier league season.  He made 13 clearances, 3 interceptions, 1 tackle and won 8 aerial duels (out of 12)

Manchester United’s popular Portugese midfielder earned a generous in form this week if you ask the community.  He contributed 1 assist and scored the winning penalty as Manchester United beat Brighton 3-2.

Another Argentinian makes the in form list, this time it’s Argentina’s midfielder Alejandro Gomez.  He scored 1 goal and got 2 assists as Atalanta came from 1-0 down to beat Torino 4-2.  This was one of the best overall performances in the world this week in our opinion.  Atalanta is back.

At 36 years young Spanish legend Andres Iniesta is back with a special Team of the Week card in his 11th straight FIFA game.  It’s pretty incredible that Iniesta is still performing at his age when many of his legendary spanish teammates have taken up performing as managers.  He scored 1 goal and got 2 assists as Vissel Kobe beat Sagan Tosu 4-3.  We’ve tried this card.  It’s great.

Mexico’s first in form of the season comes from RM/RW Hirving Lozano.  The rapid player helped Napoli embarrass Genoa with a 6-0 victory.  The young pride of el tri scored two in the victory.

Luis Suarez had a dream debut for Atletico Madrid in his moved from Barcelona.  He only played 20 minutes but he scored twice and assisted one as Atletico Madrid blew out Granada 6-1.

Jamie Vardy announces himself with another hat trick game as he continues to write himself in as one of England’s best ever strikers.  The Foxes shocked Manchester City with a 5-2 victory.  This in form is well deserved.

Good to know we’ll all be facing another OP Wissam Ben Yedder card from the very outset in this years FUT21 season.  Weekend leagues are bound to be filled with this card despite his high price tag.  With a 5 star week foot, this card might be the most dangerous in form of the week.  You can’t say the accolade isn’t deserved as much as we hate it.  Ben Yedder tallied 2 goals as AS Monaco beat Strasbourg 3-2.

Though these are receive players in the team of the week, some of the biggest upgrades are given here.  Check out some of the higher markups of the season with these.

The second division German goalkeeper had a tremendous game to earn a spot on the team of the week.  He made 5 saves, 1 successful runs out (out of 1), and saved 1 crucial penalty.  The effort kept a clean sheet as Dusseldorf beat Wurzburger Kickers 1-0.

Another German born player, Felix Udokhai gets a huge upgrade this week.  It’s pretty common to see defenders make the team of the week when they score and keep a clean sheet.  Udokhai did just that as he made 11 clearances, 1 interception, and scored 1 goal.  Augsburg shut down a favored Dortmund 2-0.

The 20 year old english youngster had a big game to earn his place on TOTW1.  He scored 2 goals as West Ham beat Wolves 4-0.

Another 20 year old on the TOTW, this time from Mali.

The Italian veteran makes TOTW1 after he scored 1 goal and got 1 assist as Sassuolo beat Spezia 4-1.

Another German and another 20 year old.  Fullkrug had a hat trick as Werder Bremen beat Schalke 3-1.

Ansu Fati has a lot of hype behind him and it was a bit shocking to see him start out with a 76 rated card.  He scored 2 goals as Barcelona beat Villarreal 4-0 but still didn’t get man of the match.  Rumor has it that this is because he’s underaged at 17 and Budweiser is the sponser of MOTM.

The 20 year old Poland international is normally known for his defensive prowess.  Not this week as he gets a huge 9 overall upgrade.  He scored 1 goal and got 2 assists as Warta Poznan beat Wisla Plock 3-1.

The Australlian national makes the TOTW out of the Korean League.  He scored 3 goals as Suwon beat Seoul FC 3-1.

Another K League in form.  This time it’s of Russian origin.  The 30 year old striker scored a hat trick and drew a penalty as Pohang Steelers beat Gwangju FC 5-3.

A massive 10 upgrade for Andrei Cristea wraps up our TOTW1 article.  The Romanian scored 3 goals and got 1 assist as Politehnica beat FCSB 5-2.